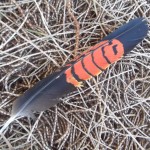 Hello friends,
I recently camped alone on our Kangaroo Island land for 15 nights and enjoyed some great walks on the sandy tracks and along the coast. The expected visit by the Copenhagen expert on primitive moths unfortunately didn’t eventuate, due to his ill health. He was coming to see the site on our land where local entomologist Richard Glatz discovered the tiny new moth species, soon to be described as a new Family of insect! I met Richard at the site, the Callitris (Native PIne) trees on the Willson River estuary. We didn’t see any of the moths, probably because it was a bit early in the short season of their adult life, but did see a specimen of a new Genus of parasitic wasps also discovered by Richard, for which the larvae of the moths are a host species. These discoveries are scientifically most interesting and it is exciting that they occurred on our land.
Although the Spring rains have been way below average on the Island our mallee scrub is still looking good and the coastal wildflowers are lovely. The Calytrix and Lasiopetalum are in full flower as are the Orthrosanthus (blue morning flag) tussocks. I had kangaroos around my tent many times at dusk, sometimes within 5 metres, and Bush Stone-curlews calling close-by at night. I think they were using the vehicle track through the thick mallee as a “landing site”, there being many large bird tracks each morning in the sand there. The notoriously shy Western Whipbirds were calling close to my camp and I managed to get a short sighting of one. At the coast the pair of Ospreys have moved from their previous nest site at Black Point to breed this year on a low limestone sea-stack close to where our track terminates. The female was on the nest despite the high seas sending showers of spray over her; occasionally she stood to shake herself off. I think they would need to be lucky to raise a brood there!
I saw several goannas and wallabies and just one echidna, a very red-brown one compared to the dark-brown to black Tothills specimens. The dawn chorus of honeyeaters and Golden Whistlers was lovely to hear. I  walked around Black Point on a day of Southerly gales and huge seas crashing on the rocks, such a contrast to the peaceful days and nights in the quiet scrub.
The only whale remains still in evidence at the coast are 10 articulated vertibrae and associated gristle and blubber on the rocks about 200 metres east of where the skull used to be. It was a privilege to be able to spend a couple of weeks in such delightful country.
I have attached some photos for those of  you getting this email version of my letter.    Regards,    John.