After a successful watering day a few weeks ago at Rockleigh we have been fortunate to have received at least sufficient rain to dampen the soil and put some water in the creeks. Dodoneas that were hanging their leaves in thirsty depression a few weeks ago are standing tall and green. There is a tinge of green and your feet no longer “crunch” at every footstep.

The crimson chats and woodswallows seem to have departed but the rainbow bee-eaters are still around. A pair of white fronted chats, pipits, whiteface, 3 hooded robins and a group of yellow-rumped thornbills made up the ground feeding contingent on the far side of the creek.

For those of you who helped on the watering day you may recall that the guards on the trees hillside of the old camping ground were missing. Once again they were all gone, possibly due to the wind but in some cases certainly helped by the roos. Marg Brown and I watered them again, replaced the guards and placed dead branches around them to deter the roos. This method is used in Turkey where Marg visited a few years ago.

I spoke to the roo shooter for Rockleigh this morning and he reported seeing a koala on his last visit back in November. That is now 2 sightings of a koala on Rockleigh. I know some of you are very much against culling roos and none of us like the idea but see it as a necessity if we are going to maintain a healthy ecosystem. We had a permit to shoot 30 western grays and in their 2 visits the shooters managed to get half that number. From what we saw yesterday the population is still very healthy. However, we are left with the question of what to do about the feral deer on our property as the shooters never saw them.

A bit more veldt grass destruction was carried out around the current campsite which is looking remarkably veldt grass free until closer inspection. Persistence must eventually pay off.

The Rockleigh watering day was very successful. There had been very few “deaths” as a result of the recent hot weather although some were distressed. With a workforce of 12 people, all the watering, and the removal of guards where necessary, had been accomplished by lunchtime. All in all it was an excellent day with the work accomplished, new people met, old acquaintances renewed and conversations had. Special thanks go to my brother for delivering 2000 litres of water and helping out on the day. 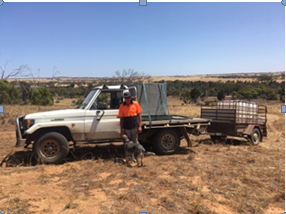 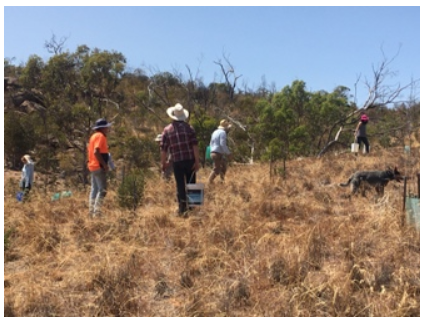 Many thanks to the Vincent siblings, and everyone else, for their untiring help on the day.

Thanks also to those of you who, for a variety of reasons, were unable to attend on the day but sent supportive emails. Much appreciated.

A final reminder to anyone wanting to comment on whether or not to change the Bushland Company structure, to please do so by Feb 14th.