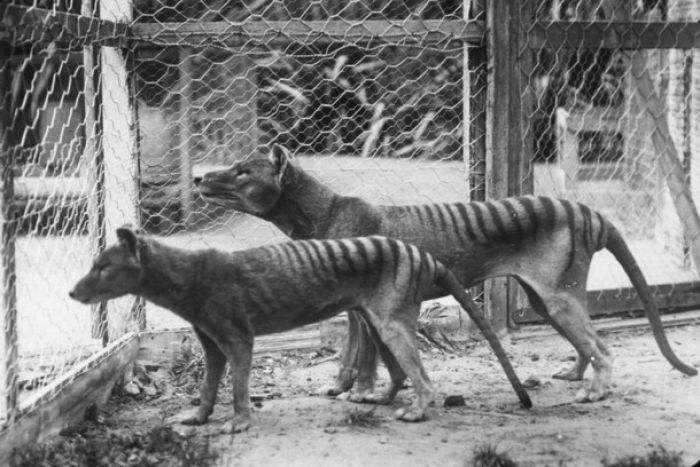 Photo: Tasmanian tigers will definitely not be found in the wild, researchers say. (Wikimedia Commons)

Rare fossilised footprints of Tasmanian tigers and devils, as well as those of giant megafauna and flightless birds, have been uncovered by scientists on Kangaroo Island, south of Adelaide. 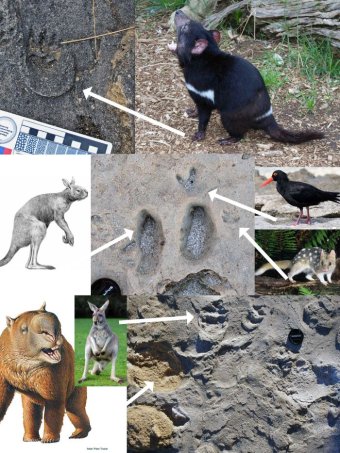 The South Australian site is on an isolated beach on Dudley Peninsula, and was found during efforts to survey 6,500 kilometres of Australia’s coastline from Western Australia through South Australia and Victoria.

Dr Aaron Camens, from Flinders University, said more than 300 trace fossils showed the island’s reputation for diverse wildlife extended as far back as 200,000 years ago.

“[We found] things like diprotodon, which was our largest marsupial herbivore that weighed about two tonnes, but also some of the more recently extinct animals in the area like thylacines and even Tassie devils,” he said.

Dr Camens said there was much researchers could learn from trace fossils and trackways, in contrast to evidence gleaned from ancient fossils such as those found in the Flinders Ranges of outback SA.

“We’ve found skeletal fossils — the bones of these extinct animals — over much of Australia, but the fossil footprints haven’t actually been looked at in much detail,” he said.

“They can potentially be preserved, where the bones don’t preserve, so that adds extra information about the distribution of these animals.

“They can show us elements of the animals’ behaviour as well — how they interacted with each other and what kind of environments they moved through.”

The Kangaroo Island site has evidence of reptiles, birds, mammals and invertebrates, potentially spanning back between 20,000 and 200,000 years, including time when the area became separated from the mainland.

Dr Camens said there was no chance the Tasmanian tiger might still be prowling parts of the mainland or Kangaroo Island.

“If we’ve got thylacines still living in South Australia, we need a viable population and not just a single one,” he said.

“For the tens of thousands of purported sightings across Australia, we don’t have concrete evidence of a single one anywhere on the mainland.”

Kangaroo Island residents drew the area to the attention of Dr Camens and his team, including Federation University geologist Stephen Carey and University of Adelaide scientist Lee Arnold.

Dr Camens said the Kangaroo Island discovery was the “tip of the iceberg” and there would be more soon to reveal about other sites on Australia’s southern coastline.