KICLA teams have now completed the weeding program for 2021, with a final four weeks in October/November and November/December. A total of 190.7 ha of initial control and 3.6 ha of follow up control had been completed as at 7/12/21 by us, with all the teams working on the problem achieving 838 ha of initial control and 165 ha of follow up control measures. As Kirstin Abley of DEW says ‘we’ve collectively cracked the 1000 ha mark in terms of total control thanks to a huge contribution of 8372 person hours…equivalent to one person working 7 hours a day, every day for 3.3 years!’ These hectares cover all of those that were considered of highest priority, next to the National Park and Heritage Agreement land. But there is an estimated 8500ha of TBG infested land, so this is a long term problem. (Thanks to Kirstin Abley of DEW who coordinates the program for these figures and maps). In the attached maps from DEW, shared with permission from Kirsten, ‘bright pink is the happy colour of TBG control and red shows the blue gum plantations’.

The size of the wildlings varies greatly. There are still some that are less than 10cm high, and many now up to 4m high, especially in damper areas. Some can still be hand pulled, but most now need to be cut with loppers or sawn and dabbed with glyphosate. The density also varies from 1/5m to 90% blue gums. Hence the total area weeded reflects an average of the time spent in quicker, less difficult areas and that in the most difficult areas, which are very slow to weed.

An indirect benefit of our grant has been the input of and interaction with remarkable volunteers from a wide range of backgrounds and experience, drawn from South Australian groups such as the Biology Society of Adelaide University, Friends of Parks and Volunteers Australia. They each donated five days of hard physical labour in often difficult conditions. Their enthusiasm and commitment are heartening. Each volunteer learnt about KI, its unique western bushland and the threats to that and will spread the word to others, so there has been a good educational outcome from the work. One volunteer said ‘we really appreciate you in this busy world trying to recover the mistakes of other humans and defending nature on behalf of us’. Similarly, local volunteers who came out with us for a day or two learnt first-hand about the extent of the threat from the blue gums and the actions being taken to counter it.

Another rewarding aspect of the work this spring and early summer has been experiencing intimately the glorious colour and cover of wildflowers in the areas being weeded. As one volunteer said, ‘usually you just get to look in at the bush from a path; we are right inside it’.

I thought you all would like to know we have detected Southern Brown Bandicoots on the Dudley Peninsula, for the first time in a  long time.

These were recorded by our remote cameras used for the woodland curiosity baiting trial in the Bushland Conservation land .

We hope to put out a press release about this, emphasising the importance of the cat eradication program shortly. 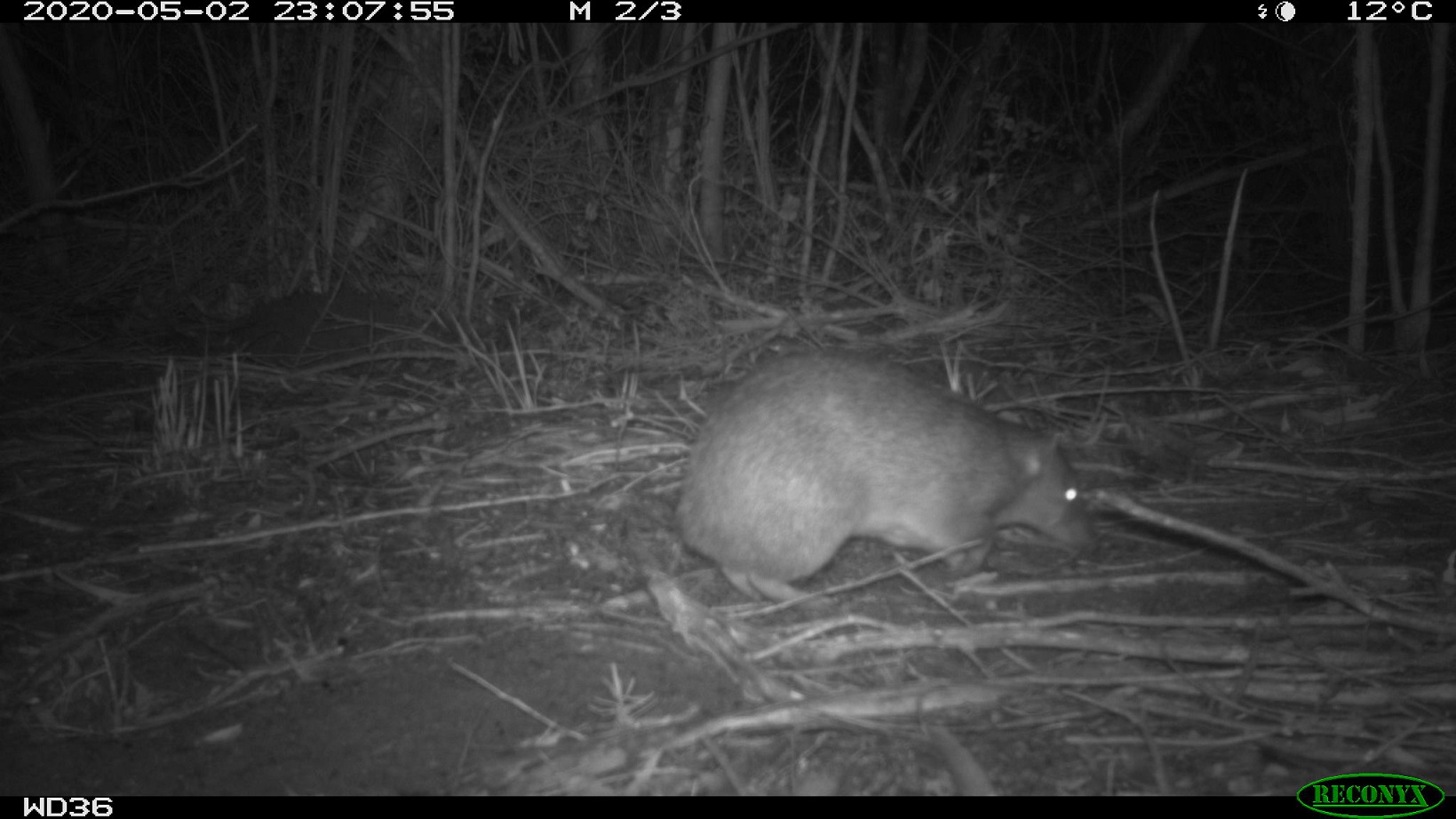 News about the KI feral cat eradication program can be accessed at the  link below and a summary is given.

Firstly, I would like to introduce myself. I’m the new Project Leader for the Feral Cat Program. I’ve been working with the program? since January this year, having moved from the Kimberley W.A. where I worked on cat control and research for nearly a decade with a non-government conservation organisation.

As you will be aware, Natural Resources Kangaroo Island (soon to be the KI Landscape Board) has been undertaking preparation work for the start of eradication activities on the Dudley Peninsula; many of you would have been in direct contact with members of the eradication team as we rolled out a camera monitoring array which helped us establish baseline information ahead of eradication work.

Following our broad scale monitoring work, I am writing to you today to inform you that we are about to begin on-ground eradication activities. The on-ground activities, and indeed the eradication itself, on the Dudley Peninsula will be guided by our operations plan which has recently been finalised, a summary of which can be found on our website.

We will be starting activity on the eastern end of the Dudley Peninsula, our reasoning for this is outlined below.

However, we’ve had to modify this technique for use across the Dudley Peninsula because;

The size of the peninsula prohibits this type of broad scale approach because by the time the mop up operations sweep across the island (it can take many person hours to find and cull the last few cats in any particular area) the remaining cats will have bred up again, possibly to pre-knockdown levels.

The technique for the Dudley Peninsula therefore involves a rolling front of control methods to “push” the eradication line across from east to west, followed continuously by intensive survey and mop up methods behind the front.

As we see it, the major advantages of this approach are that:

The Dudley-wide camera array, which was deployed in December, is aimed at detecting cats and rare native species across the landscape. These cameras will remain in place and we will continue to collect data for a one month period, every six months. Briefly:

The survey results illustrated the high level of support we have for the eradication, with over 98% approval from the 358 respondents. The KI Council has also indicated that they will focus on domestic cat management on the Dudley Peninsula as a priority going forward to compliment the eradication activity.

In conjunction with the rollout of the eradication there are a number of other related projects that will feed into, or complement the work staff are doing. For example the use of a non-1080 bait (Curiosity®) is being tested in some of the woodland areas on the southern Dudley Peninsula.

We know very little about what feral cats in woodland do and hunting or trapping them could prove very labour intensive or even impossible. So baiting represents another alternative for these areas.

Curiosity contains PAPP which is more carnivore-specific than 1080, so if an animal such as a possum does consume a bait, it will not be affected. Baiting will be conducted in the winter months when goannas and other reptiles are not active. We have engaged a contractor to help us determine if baiting using Curiosity in woodland will be an effective means of controlling cats in this environment.

We’ll be sending out more information to the Dudley and Kangaroo Island community shortly in the form of a feral cat focussed newsletter and updates on our webpage.

This eradication project will only be successful if we have community support and involvement. One way the community can help is by downloading and using the free Feralscan app. Any records of feral cats (sightings, droppings, tracks, etc.) can be very simply recorded and we can compile that information to further help us plan the eradication.

The Dudley Peninsula feral cat eradication ‘Safe Haven’ project is funded through the Australian Government’s National Landcare Program and is due to be completed by June 2023. The KI Feral Cat Eradication Program is guided by the strategic oversight of the KI Landscape Board and a steering committee made up of conservation and animal welfare experts and representatives from state and federal government.

Kangaroo Island Wildlife Network  recently purchased the property adjoining Bushland Cons property at the NW corner . Their property encompasses the remaining pines that make up the type locality for the Enigma moth. The property because adjoined the heritage area of Bushland Conservation which extended through to the coast, and increased the contiguous area held for conservation.

‘Thanks for the recent bird list and notes on the Rockleigh property. Sounds like I should visit there while the trees are blossoming. A few years back there was a good flow of nectar in the Peppermint Gums up here in the Mid North and every little patch had lots of honeyeaters. That year was interesting in light of your 2 new species from Rockleigh, ie yellow-faced and white-naped, as these 2 sp were abundant together in the E. odorata here that year, whereas they are almost rare around here usually; Tothills excepted, which always has a  few resident yellow- faced.’