Report on the Rockleigh bushfire, following time spent on the fire-ground on the day after the fire started, by directors Graham White and Brendan Lay

The fire started about 12 noon on the 26th March when a sparks from a loader being used to unearth quartz rocks ignited stubble on an adjacent property (along our northern boundary). Fresh to strong north – north west winds quickly caused the fire to spread south and enter our property about 400 metres from our northwestern corner. By the time CFS trucks and waterbombing aircraft arrived it had already spread south, gaining ferocity as it progressed, although firefighters were able to limit spread to the east such that about 30% (estimated) was untouched . The eastern edge of the burnt area goes approximately from the major creek junction in the north, past the western edge of the area of Triodia hummocka, to the rocky hills at a rock feature colloquially referred to as “the Finger”, then southeast to the southern road boundary about 50 metres or so west of our eastern gate. The fire jumped the Rockleigh (Tepko) road in several places and continued south east, eventually travelling some 10-12 km and burning out about 15 square kilometres (1500 ha) of farmland.

When the fire was first reported in the media, it was clear that it was somewhere near our block, but it was impossible to find out exactly where the fire was burning. Eventually I phoned Lorraine Moore our neighbour to the west and a CFS staging post. She was most helpful and by nightfall on the 26th, it was clear that it was likely our property had been affected. Due to road closures preventing access, we planned to go to the area at first light the next day,
We arrived at Rockleigh at about 8 am on the 27th, with none of the predicted rain evident and a strengthening northwesterly blowing. In our area there was no running edge – the CFS crews had contained the fire overnight. Our plan was to first survey the extent of damage. In doing this we chanced upon the chap whose machinery started the fire. He was understandably devastated and it was poignant to gain an appreciation of the human element of this rather disastrous incident – as it could have happened to anyone. After that we worked to secure the eastern fire edge on our place by progressively blacking out burning trees etc to a safe distance from unburned ground. Most work was needed in the stony hills and also around the main gullies, and we emptied a knapsack and chain saw several times doing this, with CFS crews from Freeling and Jervois adding to our efforts. 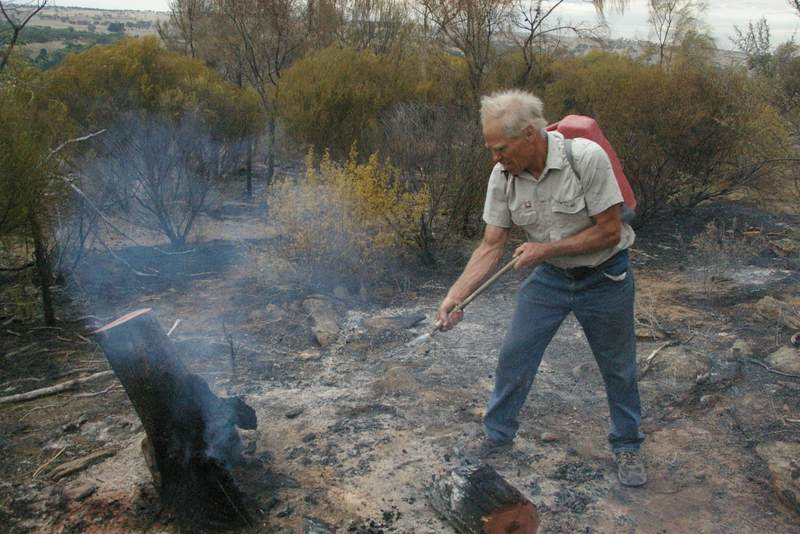 Bren attempting to put out burning stumps on the fire line 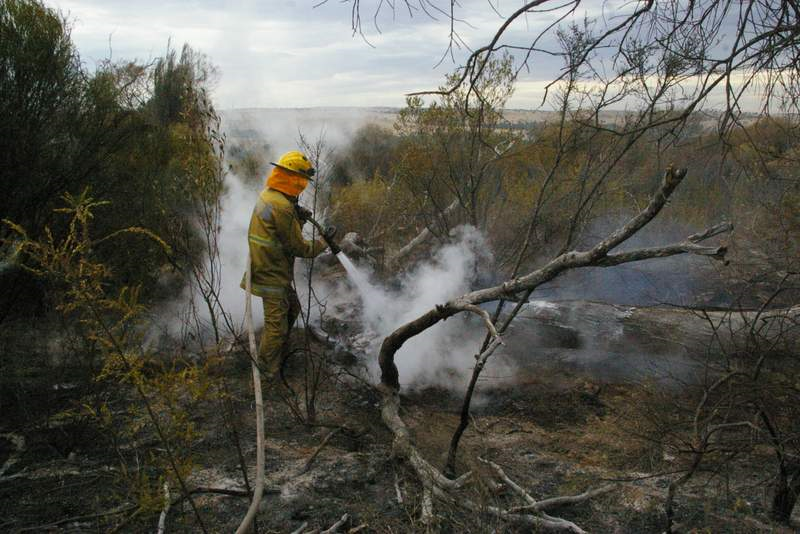 The CFS had more water though they were going to Palmer to re-supply. This chap was from a Freeling unit.

Weather conditions steadily deteriorated during the day with the promised rainfall not eventuating. By midday the wind was gale-force and the palls of dust, sand and ash were so thick at times it was nearly impossible to see or breathe 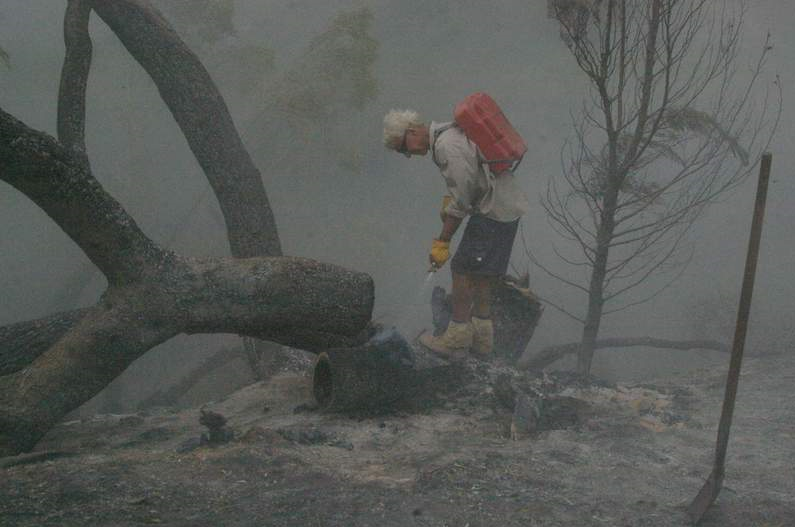 In the afternoon we attempted to put out burning pink gum trees  by blocking burning openings in the trunk with sand and emptying knapsacks in an attempt to cool down the area. However I suspect this may have been largely futile due to the strong winds and difficulty of accessing the burning areas. We knocked off in the early afternoon, rather exhausted and full of ash and dust, and called in to see neighbour Lorraine Moore on the way home. 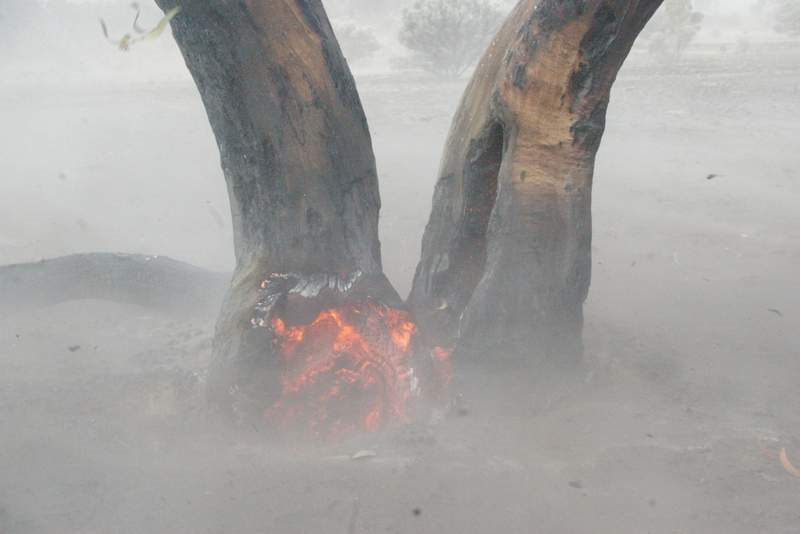 The intensity of the fire was extreme in parts and consequently nearly everything burnable had been destroyed. This included most of the fences on the northern southern and western sides (a separate report has been prepared on these fences for our insurers). Other property lost included rolls of wire, fence posts, bird hides, tyres on implements,, plastic water containers, tree guards etc. 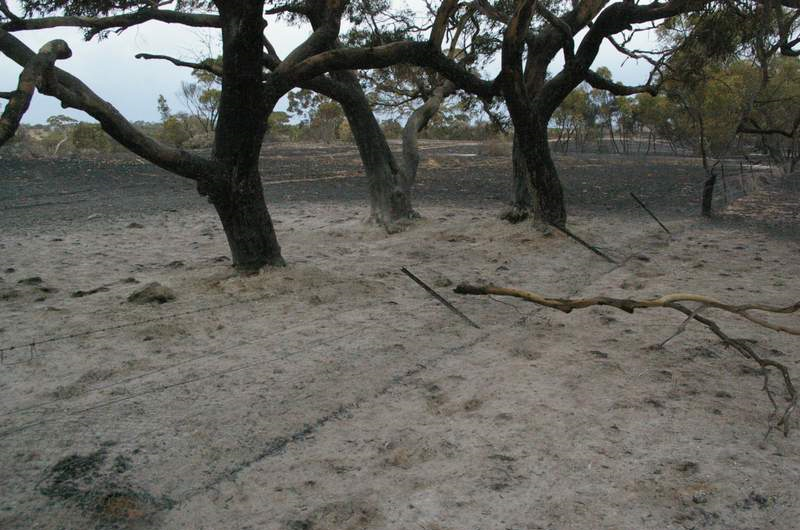 Most fences were destroyed or severely damaged 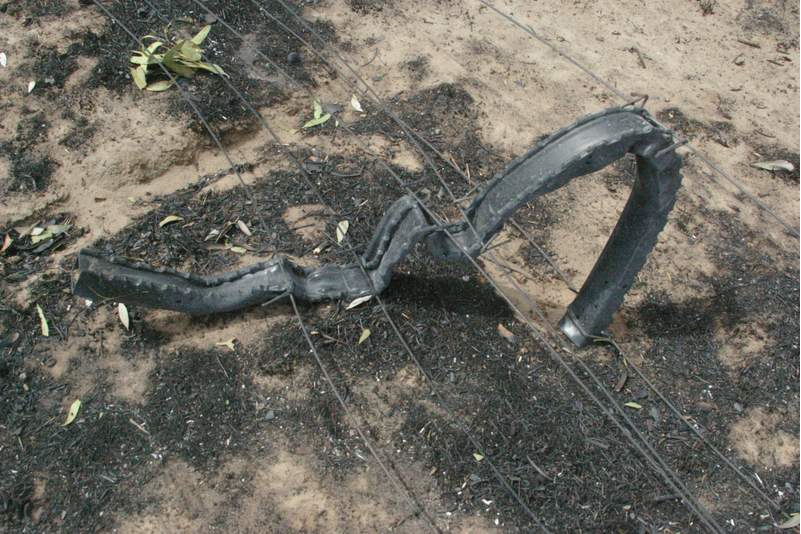 Polydroppers didn’t fare too well either!

The campsite is almost unrecognizable due to the intensity of the fire in that area. 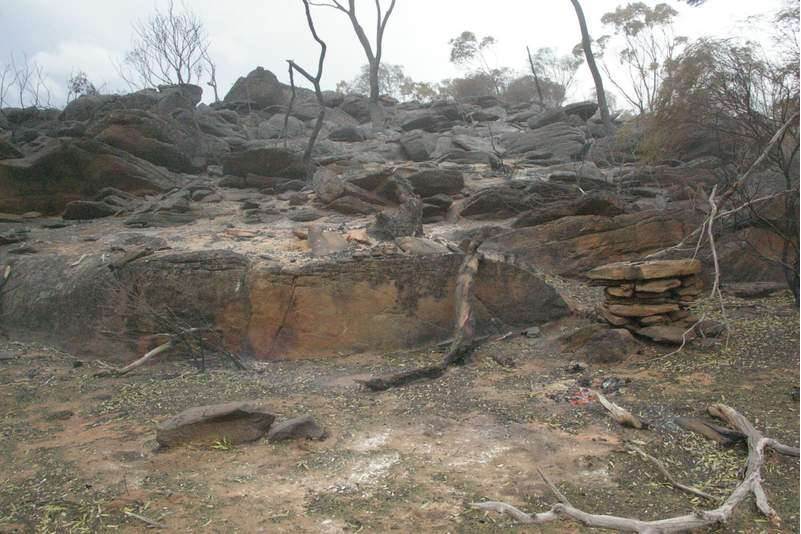 The campground site – almost unrecognizable – nothing spared in this area

Fortunately the areas of naturally high biodiversity were largely spared from fire. This includes the eastern Callitris groves, some of the Spinifex (Triodia) grassland. The areas of Xanthorrhoea on the northern slopes of the low range of hills have been spared, and the particularly valuable Banksia heathland near the north central parts of our property were also largely unburnt.
However the magnificent relic old pink gums were another story – the vast majority, maybe 80-90%, have been either killed or destroyed completely , and it remains to be seen how many regrow either from branches or from near the base. Similarly many aged callitris have been destroyed , with the many young ones also completely singed inevitably leading to death even if the trunks were not burnt. This includes the trees planted in the campground area. 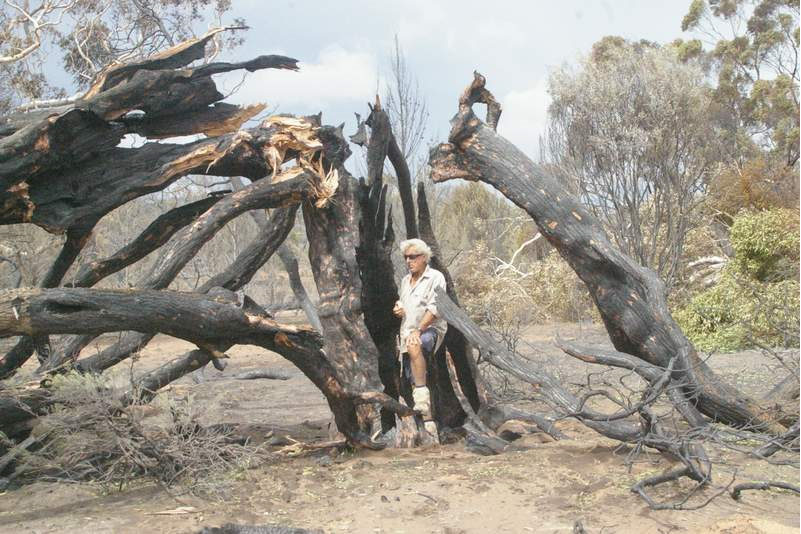 Wildlife losses are unknown but at least one western grey kangaroo was not able to escape the fire front . 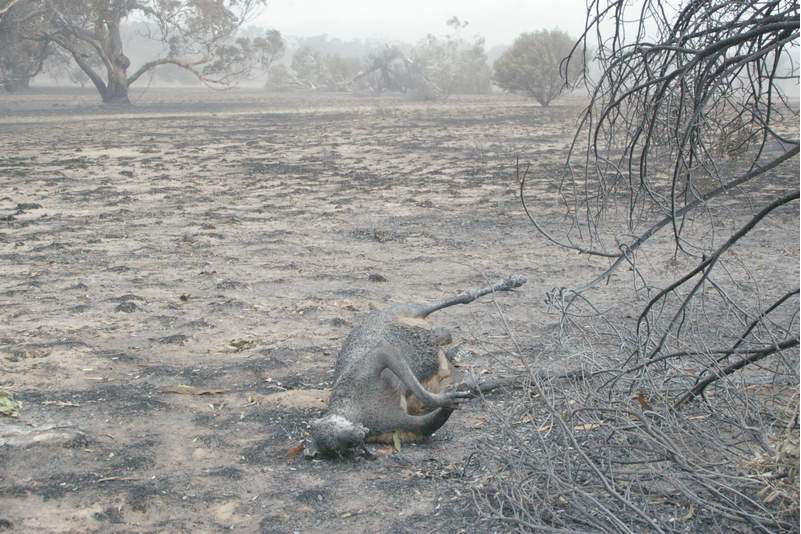 It remains to be seen what extent of regeneration occurs once a good autumn rain is received. It would be good to see some objective monitoring installed to document vegetation response.

This fire was, in the area affected, particularly severe and occurred at a time that the vegetation was most susceptible, namely at the end of a particularly long dry period. This, coupled with the strong winds during and after the fire, has resulted in the near complete loss of mature specimens of pink gums and native pine, as well as most of the recent tubestock plantings. We should use the opportunity we now have to carefully plan a way forward to ensure the effectiveness of future revegetation and weed control efforts. 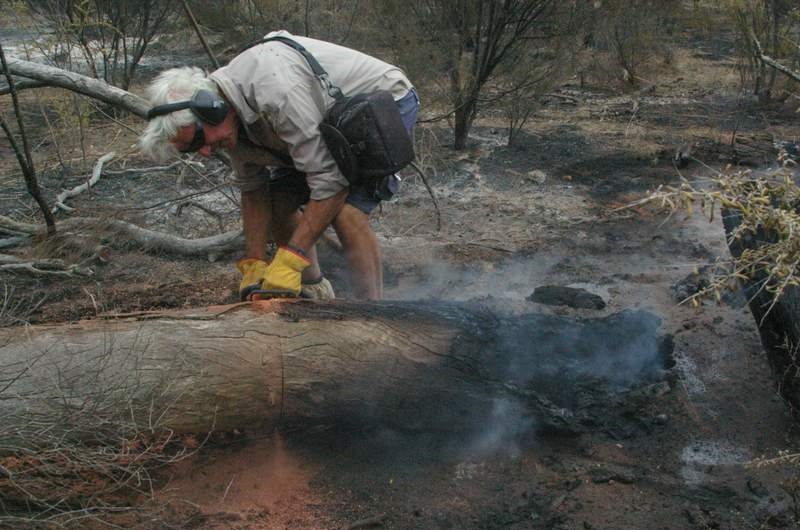 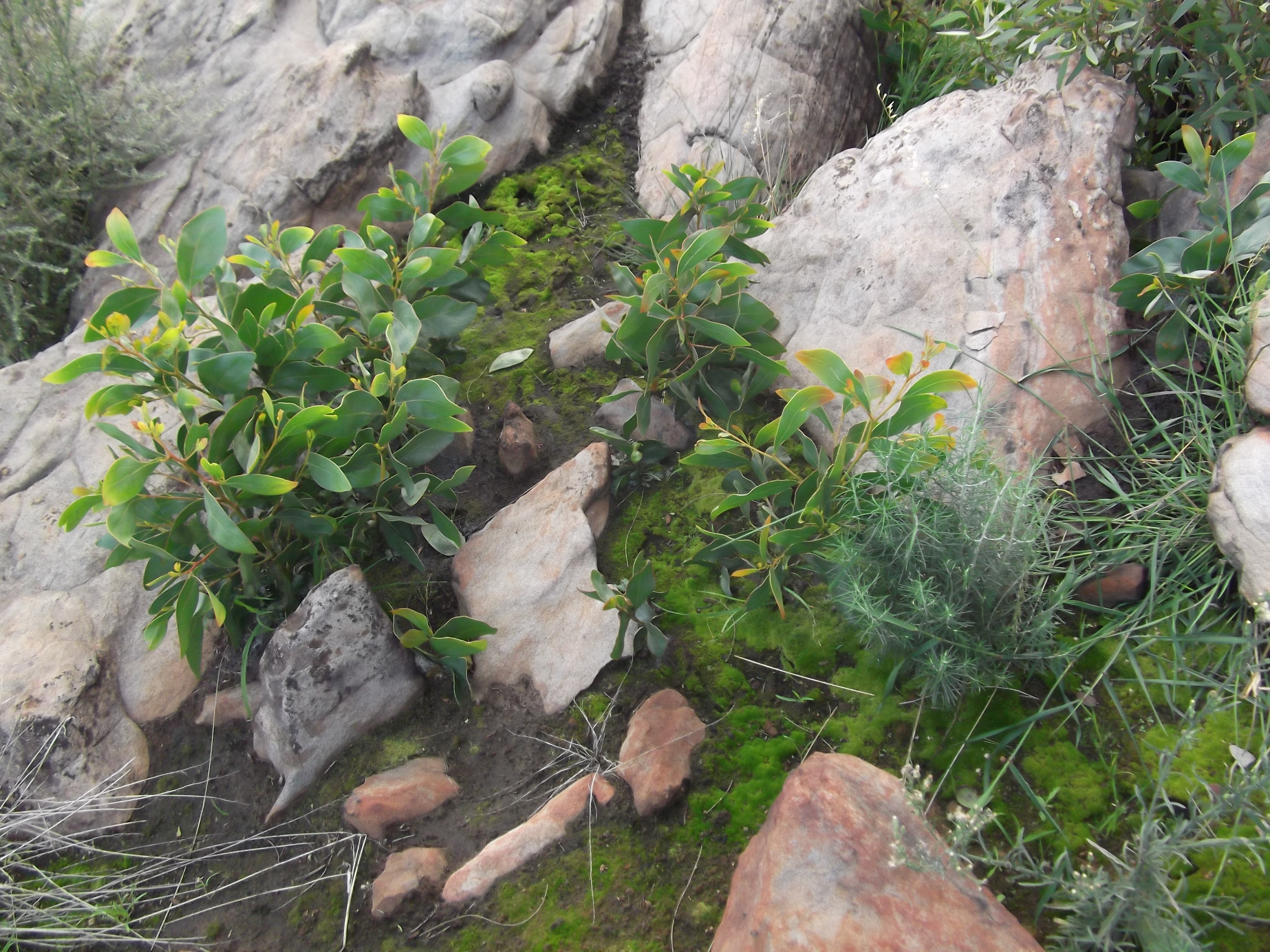 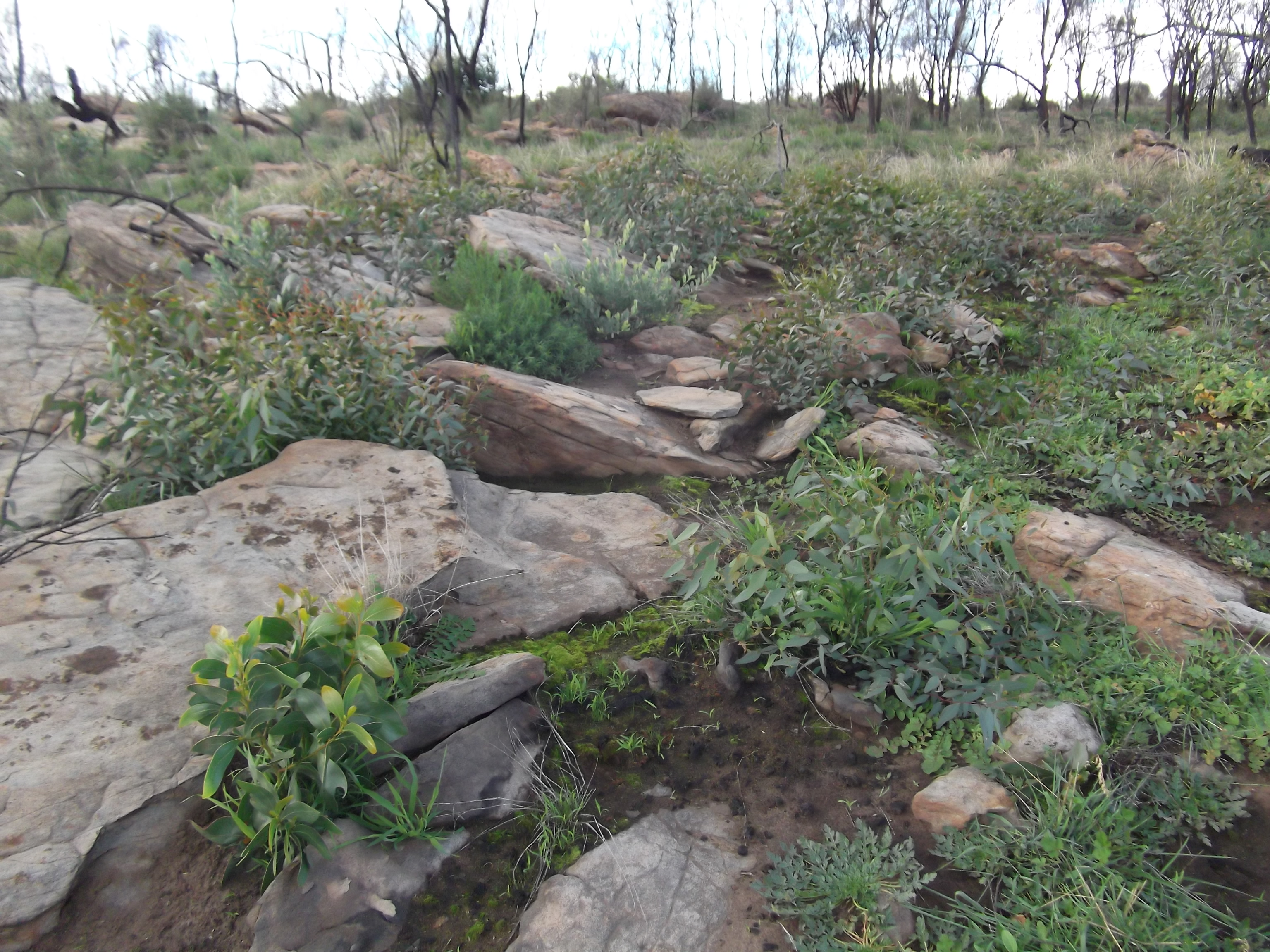 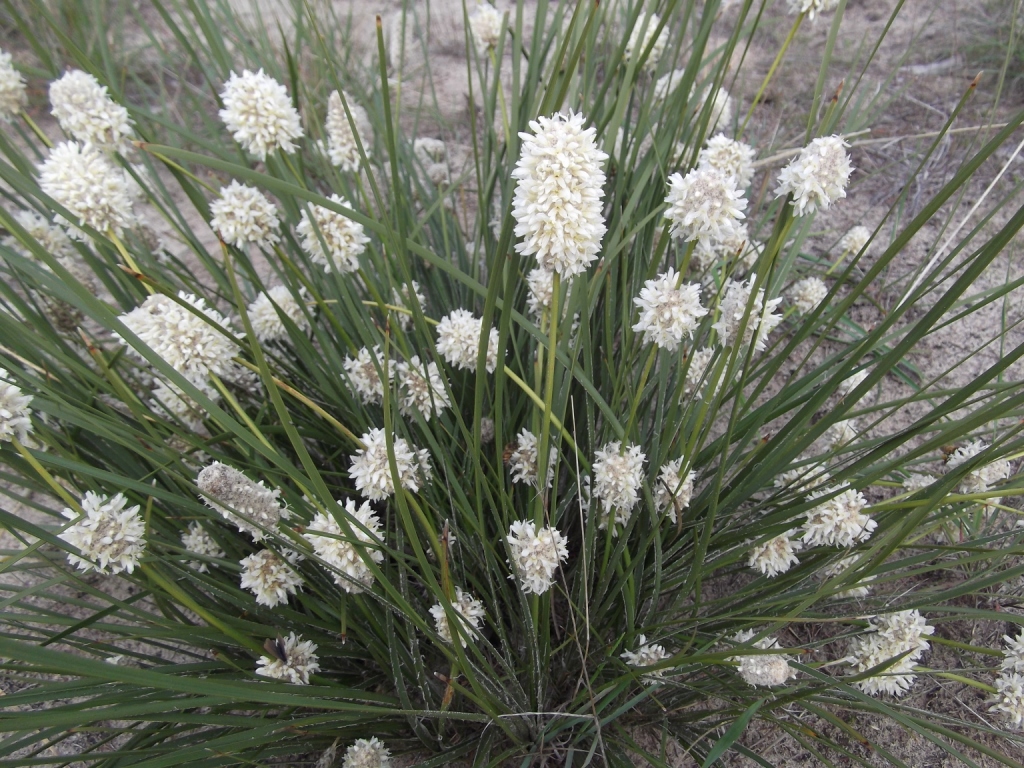