Grace Hodder is a PhD student at Adelaide University studying  Diamond firetails and working under David Paton. She sends periodic progress reports to the directors given here.

The Diamond Firetail (DFT) is one of a suite of ground-foraging birds with rapidly declining population abundance in the Mount Lofty Ranges region (MLR). Without remedial action, the disappearance of this once widespread species from the MLR is inevitable. To date, there have been no rigorous attempts at targeted management programs for the DFT in this region.

Whilst DFTs are known to be adversely affected by clearing for agriculture and urban development on a broad-scale it is not known exactly which specific processes directly affect DFT populations. However, there is evidence to suggest that a shortage of food, particularly during winter, when breaking rains cause seeds to germinate and become unavailable to foraging birds, might inhibit the recruitment of juveniles into the adult breeding population. To test this, my study aims to answer these key questions: 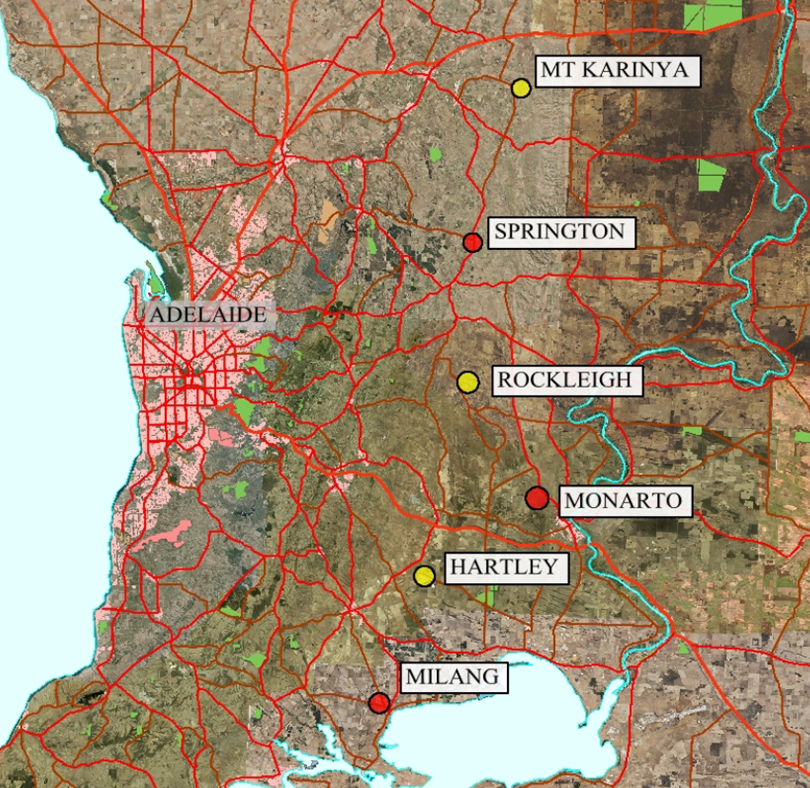 To test the hypothesis that limited seed abundance at certain times of the year is contributing to Diamond Firetail declines, additional seed is being supplemented at half of the study sites. Population viability analysis and survival rates will then be compared between supplemented and non-supplemented populations. Self-automated watering troughs have been designed, assembled and installed at all 18 study sites across the eastern Mount Lofty Ranges – including two at the Rockleigh Conservation Block. These act to attract DFTs to a central point regularly for monitoring and trapping. They also reduce any bias in sub-population numbers and demographics relating to water availability. Motion sensor cameras are recording DFT visitation to the troughs, and re-sighting colour-tagged birds. Automatic feeders, with finch seed mix, have been installed at all “supplemented” sites. The feeders were implemented in May this year, but observational and camera data suggest that DFTs are only regularly using this supplement feed at the Monarto study sites.

In order to adequately track and model sub-population viability, and compare survival between supplemented and non-supplemented sites, DFTs have been trapped and banded with individual colour-tags since the start of the project (in spring 2013). Trapping adequate numbers of DFTs at each site has proven difficult, and total banded numbers currently vary greatly between study areas. I aimed for 50-100 tagged birds at each study area. Sufficient numbers have been tagged at Rockleigh (a total of 69) and Monarto (a total of 62) to date, so population viability and survival rates will be compared between these two sites only for 2015. I aim to run the feeding experiment again next year, and focus trapping efforts this summer (2015/2016) to increase the numbers of tagged birds at my other study areas.

Seasonal tracking of foraging flocks is providing information on seed and foraging habitat preferences, as well as additional DFT sub-population abundances and demographics data. Crop-sampling of captured DFTs has been undertaken in most seasons, when DFTs with full or near-full crops are captured. The crop-sampling aims to identify seeds prominent in the DFT diet in different seasons, in addition to any field observations. These samples have been stored for genetic analysis of de-husked seeds.

Measurements of seed abundances throughout seasons are ongoing at all sites (and began in spring 2014), to determine the amount of seed on inflorescences and on the substrate surface available to DFTs at different times of the year. Measurements of grass and forb phenology (or stages of growth and development) in a variety of understory types has been ongoing since spring 2013 and occurs approximately every 6 weeks as weather conditions change (i.e. after breaking rains or large rainfall events). Seed and plant samples for counting and identification have been stored for processing in the laboratory, and this data is yet to be processed.

One sub-population at Monarto has been supplemented with seed and monitored monthly since June 2014. Monthly dawn-dusk surveys of DFT visitation to this supplement feeder, as well as recordings of foraging rates, have provided data on individual daily caloric intake of the supplemented seed. The substantial number of birds in this area tagged early on in the project has also provided demographics and survival data for the first year of the project.

Analysis of this data shows that the average daily intake at the supplement seed is significantly larger during winter months than it is during spring and summer months (Figure 1). Over winter, this sub-population obtains all of its daily caloric needs from the supplement feed. As mass-seeding events occur in nature during spring, the reliance on supplement seed is reduced, and DFTs obtain approximately 50% of their daily caloric requirements from the feeder. Dependence on supplement seed increases again during April and May, around the time that natural fallen seed mass-germinates (Figure 1).

Survival rates seem high among this sub-population, with 82% of birds tagged in autumn 2014 surviving through winter to spring 2014, and 64% surviving to winter 2015. The presence of young (juvenile and immature) birds in this population in December, January, February, April and June (2014-2015) indicates that successful breeding events occurred on multiple occasions throughout spring, summer and into autumn.

The trends in this sub-population over the past year give evidence towards my hypothesis: that a shortage of food at certain times of the year is influencing survival. It is clear that at times, this population is wholly reliant on supplement seed, but DFTs obtain some seed from nature when natural seed is available during spring and summer. Supplementing feed seems to have promoted multiple breeding events and high survival rates; the population is doing well with additional seed. My results to date indicate that food resources are of great importance to ongoing DFT survival in the region. However, more data is needed on other sub-populations, comparisons with non-supplemented sites, and measurements of natural seed availability to better understand the whole picture.

Future work: timeline for the next 12 months

November 2015: tracking and observations of foraging flocks, seed abundance surveys at all sites. Second spring phenology measurements at all sites

December 2015 – March 2016: trapping and tagging of DFTs at all study areas. Aim to have 50-100 birds tagged at each area by winter. Re-capture attempts of tagged DFTs at Monarto and Rockleigh. Summer phenology measurements all sites

March 2016: process and analyse phenology samples and data. Identify important species for the DFT. Determine whether ongoing monitoring of certain species is required

April 2016: re-measure phenologies of specific grass species where necessary after breaking rains, and at other times of the year where data is lacking